"The U.S. House of Representatives shall be composed of Members chosen every second Year by the People of the several States, and the Electors in each State shall have the Qualifications requisite for Electors of the most numerous Branch of the State Legislature." 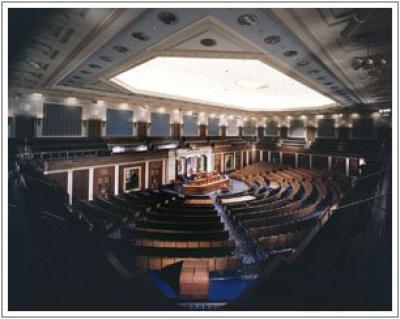 James Madison, a key architect of the Constitution, described the U.S. House of Representatives as a legislative body with “an immediate dependence on, and intimate sympathy with, the people.” From the House’s inception, Representatives have been elected directly by the people. Further, the constitutional requirement that Representatives must stand for election every two years has defined the House as an institution that is responsive to the will of the people and that serves as a forum for their political priorities.

The House is the larger of Congress’s two legislative bodies. Its membership is based on the population of each individual state. By law, its current membership is set at 435 Representatives, plus nonvoting delegates from the District of Columbia and the U.S. territories. The House possesses the sole authority to impeach federal officials and, in the case of indecisive Electoral College results, to elect a president. While revenue and spending bills traditionally originate in the House, the Senate may amend them as with any other piece of legislation.

Criteria for Being a Representative