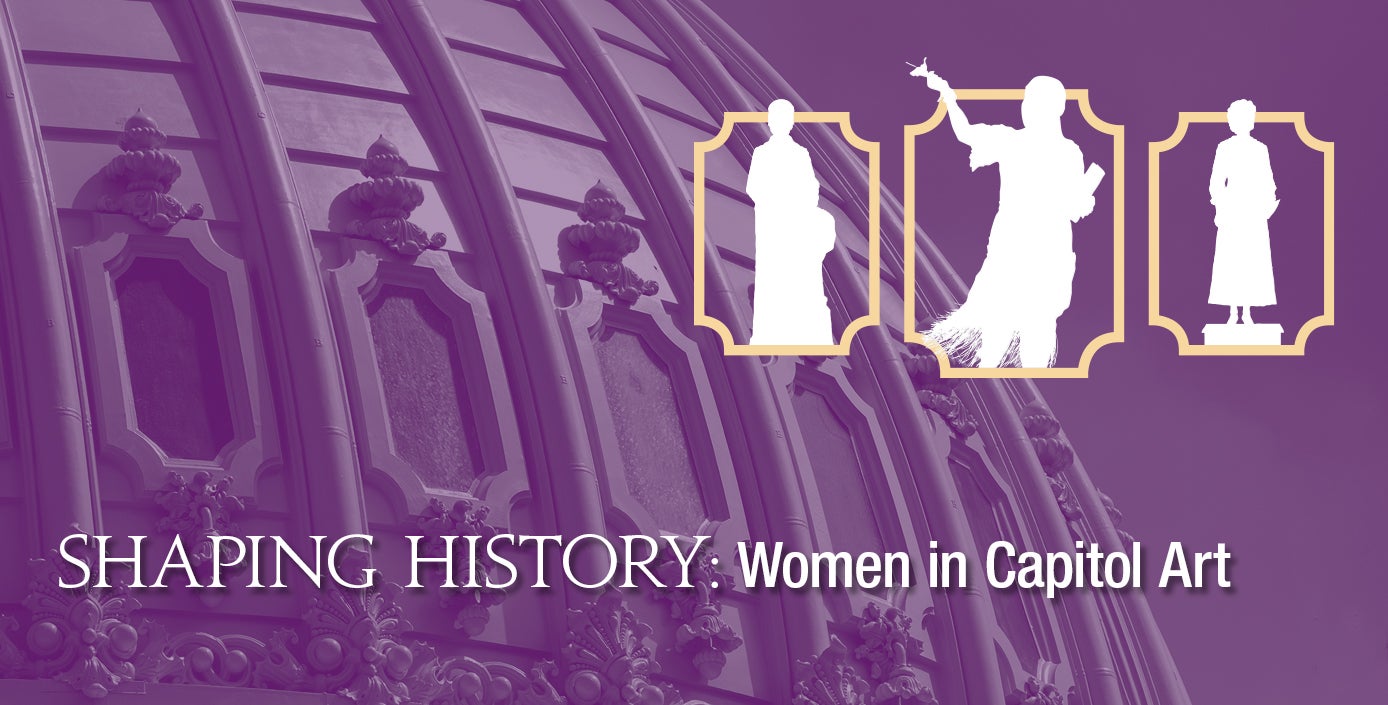 Shaping History: Women in Capitol Art brings together a rich soundtrack featuring curators, historians, artists, descendants of honored subjects, and eyewitnesses, providing insight that will enhance every visitor’s Capitol experience. Taking their cue from the art itself, participants in Shaping History: Women in Capitol Art animate the stories behind the art, amplifying the meaning and larger context of numerous artworks, with a focus on the National Statuary Hall Collection.

To listen to the Shaping History: Women in Capitol Art podcast, click here.

Introduction To The Series

The year 2020 marks one hundred years since the ratification of the 19th amendment to the United States Constitution. After a long struggle, the majority of American women finally were allowed to exercise the right to vote, a watershed moment that has prompted our reexamination of art in the United States Capitol by and about women.

In the 19th century, women depicted in Capitol art were primarily symbolic figures. The most widely known is surely the Statue of Freedom, atop the Capitol Dome. Sculpted by Thomas Crawford and hoisted into place in 1863, she is both icon and inspiration. Consistent with centuries of depictions of women in western art, her colossal stature and patriotic attributes give form to a national aspiration, not a specific person; however, with the increasing prominence of women in artistic, social, and political arenas (for example, 126 women currently hold seats in the United States Congress, comprising close to a quarter of the 535 members), there is a growing number of U.S. Capitol sculptures and paintings honoring individual women who have shaped American history. Further, in the 21st century, women are as likely as not to be the artists behind the art.

This podcast series brings together a rich soundtrack featuring curators, historians, artists, descendants of honored subjects, and eyewitnesses, providing insight that will enhance every visitor’s Capitol experience. Taking their cue from the art itself, participants in Shaping History: Women in Capitol Art animate the stories behind the art, amplifying the meaning and larger context of numerous artworks, with a focus on the National Statuary Hall Collection.

The timing of these podcasts takes advantage of scholarship in recent decades that focuses on women artists, the women’s suffrage movement, and the contributions of African-American and Native American women to the struggle for civil rights in this country. The groundbreaking essay “Why Have There Been No Great Women Artists?,” published in 1971 by acclaimed feminist art historian Linda Nochlin, revealed how inequities in training and access impeded women’s efforts to gain traction in the male-dominated art world. Despite this institutional resistance, however, 27 women artists have completed sculptural commissions for the Capitol, the majority of which are in the National Statuary Hall Collection. These podcasts highlight some of them, ranging from Anne Whitney’s marble neoclassical statue of Samuel Adams for Massachusetts to Deborah Copenhaver Fellows’s realistic bronze statue of Barry Goldwater for Arizona. Several established and emerging scholars -- Melissa Dabakis, Jacki Musacchio, and Jacquelyn Delin McDonald -- comment on Vinnie Ream Hoxie, Anne Whitney, and Elisabet Ney, respectively, and their work exemplifies the sustained interest in women artists.

The sculpture most emblematic of Shaping History: Women in Capitol Art is Adelaide Johnson’s Portrait Monument (1921). Johnson based this work on individual portrait busts of suffrage pioneers Susan B. Anthony, Elizabeth Cady Stanton, and Lucretia Mott, which she had sculpted for the Court of Honor of the Woman’s Building of the 1893 World’s Columbian Exposition. Unveiled in the Capitol Rotunda on February 15, 1921, Susan B. Anthony’s birthday, this unconventional monument commemorates a group rather than an individual. Within 24 hours of its dedication, it was moved to the Crypt below, where from 1921 to 1997 it occupied three different locations. In 1995, on the occasion of the 75th anniversary of the ratification of the 19th amendment, Alaska Senator Ted Stevens introduced legislation to relocate the Portrait Monument to the Rotunda. Congress eventually approved its relocation in 1996, but the legislation did not provide funding. A coalition of women’s groups formed the Women’s Suffrage Statue (“Raise the Statue”) Campaign to raise the $75,000 needed to move the eight-ton marble sculpture, finally accomplished in 1997 where it was unveiled for a second time in the Capitol Rotunda. Filling out the story around this monument, Susan Philpott from the Belmont-Paul Women’s Equality National Monument, weaves the dramatic tale of the women’s suffrage movement and political protest in Washington, D.C.

Other episodes recreate what it was like to witness the Lying in Honor of Rosa Parks in 2005 and then see her statue unveiled in 2013. House Curator Farar Elliot describes Sarah Winnemucca’s testimony to Congress, and Sherry Ely-Mendes, her great-great granddaughter, remembers her pride at the statue’s unveiling. Cari Carpenter shares a passage from her biography of Sara Winnemucca, and Sharyl Pahe-Short and Adrienne Smith from the National Museum of the American Indian provide a Native perspective on the statues of Sakakawea and Sarah Winnemucca that expertly links details of the figures to their life stories and cultures. And to explain the artist’s point of view, Deborah Copenhaver Fellows, sculptor of the Barry Goldwater statue, and Artis Lane, creator the Sojourner Truth bust, discuss their creative process and approach to commemorative sculpture.

As a collection, this series of podcasts aims to make women’s history and women’s artistic contributions come alive for the visitor, even from the comfort of your couch. We hope you will have an opportunity to sample this rich offering to gain a deeper appreciation of the art on view in the U.S. Capitol, the role it plays, and the historical forces that shaped it.

Reform and Revolution: A Reflection on the Portrait Monument and the Women’s Suffrage Movement
Walking the Halls of the Capitol – Episode 6

Walking the Halls of the Capitol: From Lobbyist to Legislator
Women in Capitol Art – Episode 7

Women in Capitol Art – A Discussion with Dr. Michele Cohen, Curator, Architect of the Capitol
Votes for Women Tour – Episode 8