The Portrait Monument and the Movement Toward Suffrage

Women in 1800s America overcame obstacles that a social structure, assembled by men, placed in their way. They found success in careers, made their voices heard in public life and achieved great things. The barriers that remained were often matters of law, and in order to influence those laws, women realized that they needed the right to vote.

The path to suffrage for women was not a straight line, and the people involved were a diverse group in age, race, education and attitude. This year as we celebrate the 100th anniversary of the ratification of the 19th Amendment, we recognize the multiple narratives interwoven in the Women’s Suffrage Movement.

To unspool a section of this complicated history, we looked to our neighbors at the Belmont-Paul Women’s Equality National Monument and an artwork in the Capitol: the “Portrait Monument” to Lucretia Mott, Elizabeth Cady Stanton and Susan B. Anthony

Adelaide Johnson, (1846-1955)
Johnson sculpted the marble “Portrait Monument to Lucretia Mott, Elizabeth Cady Stanton, and Susan B. Anthony” that can be seen in the Rotunda of the U.S. Capitol.

The monument was presented to the U.S. Capitol as a gift from the women of the United States by the National Woman's Party. The unveiling ceremony was held in the Rotunda on February 15, 1921, the 101st anniversary of the birth of Susan B. Anthony. Representatives of more than 70 women's organizations attended the ceremony. (hyperlink):

This group Portrait Monument to the pioneers of the Women’s Suffrage Movement, which won women the right to vote in 1920, was sculpted from an 8-ton block of marble in Carrara, Italy. The monument features portrait busts of three movement leaders: Elizabeth Cady Stanton, Susan B. Anthony and Lucretia Mott.

This is the painting of Inez Milholland described in this episode. Her painting hangs beside a bust of Alva Belmont, also sculpted by Adelaide Johnson, that is on display at the Belmont-Paul Women’s Equality National Monument.

Guest speaker and Park Guide, Susan Philpott (right), poses with our host, Janet Clemens, next to the bust of Elizabeth Cady Stanton. The three separate busts of Stanton, Lucretia Mott, and Susan B. Anthony were all designed by Adelaide Johnson and served as the precursor to the “Portrait Monument.” This podcast was recorded on location at the Belmont-Paul Women’s Equality National Monument. 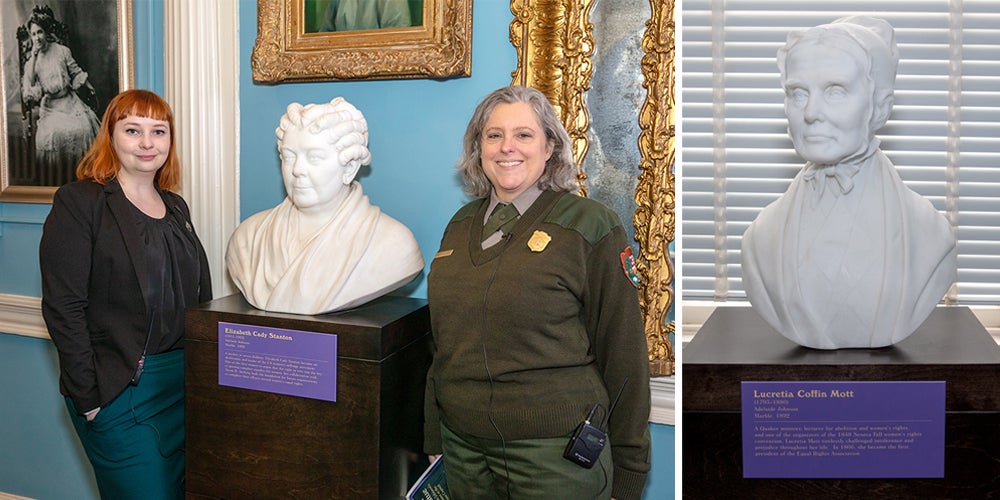 Article Tags
Shaping History: Women in Capitol Art
podcast
Reform and Revolution
Getting To The Capitol